Bucky Fuller was concerned with the question “Does humanity have a chance to survive lastingly and successfully on planet Earth, and if so, how?“

Considering himself an average individual without special monetary means or academic degree, he chose to devote his life to this question, trying to identify what he, as an individual, could do to improve humanity’s condition, which large organizations, governments, and private enterprises inherently could not do.

You never change things by fighting the existing reality. To change something, build a new model that makes the existing model obsolete.

During the last two weeks of January 1975 Buckminster Fuller gave an extraordinary series of lectures concerning his entire life’s work entitled Everything I Know.

The transcripts can be found here. 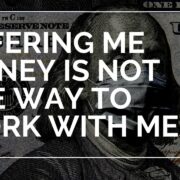 Money & You® – Sufficiency is Heavenly

Offering me MONEY is not the way to work with me

5 Keys to Synergy for Entrepreneurs
0 replies