I have a dream, a common dream of the people devoting to renewable energy source around the world, that for the blue sky and white cloud of the later generations, qualified products are used to realize renewable energy substitution.

I have a dream that one day throughout the whole world, renewable energy sources will take the dominant position.

I have a dream that one day my entire country fellows, even the global citizens, know about solar energy and make full use of it.

I have a dream that one day solar industry will be as advanced as IT industry, as mature as electric home appliances industry, and as large-scaled and automatic as automobile industry.

I have a dream that one day the sky will be much bluer, the water will be more limpid; our homeland will be full of sunshine, tranquil with no war.

I have a dream that one day our later generations will chase each other happily in the bright sunshine and fragrance of beautiful flowers, that green civilization will be spread in every inch of the earth.

My dear fellows let us join together, for the blue sky and white cloud of later generations, using qualified products to realize renewable energy substitution… 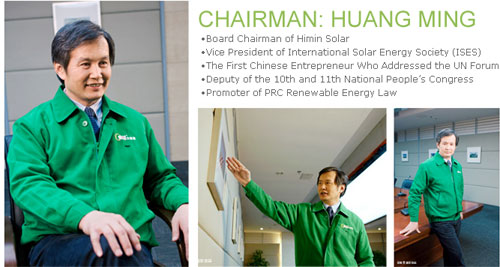 Huang Ming, an oil equipment engineer turned crusader against the use of fossil fuels, is known in China as “The Solar King”. In less than 10 years, his innovative ideas and adoption of cutting edge technology has turned Himin Solar, a once-obscure company, into one of the world’s largest solar water heater manufacturers.

Huang Ming is also referred to as the pioneer of China’s clean energy industry. In his capacity as the 10th National People’s Congress (NPC) deputy, he proposed the Law on Renewable Energy. The law came into effect on January 1, 2006, and lays a legal foundation for China’s strategy for dealing with the energy crisis.

Huang Ming was invited to speak at the 14th UN Conference on Sustainable Development, and to share with the world the Himin model of solar industry development. Due to his great contribution to the renewable energy industry, Huang Ming received an award from the World Wide Fund for Nature in March 2007.

Huang Ming’s dream of blue skies for China has improved millions of lives. Next, he plans to power China, and then the world, with the inexhaustible energy from our sun.

Money & You
Brisbane, Australia
2021 Dates to be announced
www.moneyandyouaustralia.com.au

5 Mistakes Most People Make When Setting Goals
Scroll to top